This article originally appeared on Laser Time, August 20, 2015.  This is my original, unaltered version.

8 Reasons Predator 2 is the Best Predator 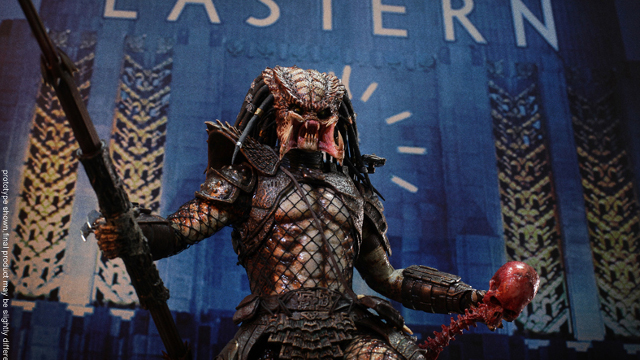 Legendary director Ingmar Bergman once said of cinema: “No art passes our conscience in the way film does, and goes directly to our feelings, deep down into the dark rooms of our souls.” In the film Predator 2, Danny Glover's character, Det. Mike Harrigan, said: “Okay Pussyface, it's your move.”

And that is Predator 2 in a nutshell: harsh, intense, blunt, and above all, aggressive. Predator 2 is a nasty piece of work, and I mean that in the best way possible. Full of awesome action, brutal violence, and more f-bombs than you can shake a smart disc at, Predator 2 has always been a personal favorite of mine, and I've long felt that it has been unjustly maligned ever since its release back in 1990.

That's right. 1990. Which means 2015 marks the sci-fi sequel's 25th anniversary. What better time to countdown the many reasons why Predator 2 is the best Predator of them all. 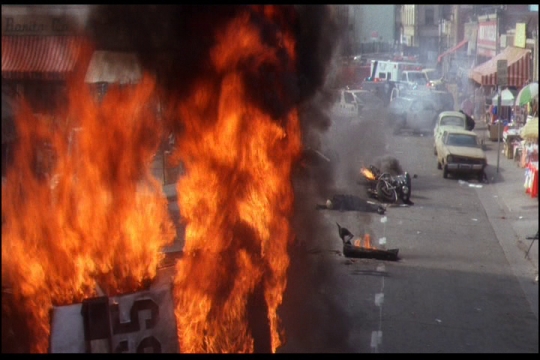 Though the budget for Predator 2 is listed at $35 million, it looks like it cost twice that amount, and director Stephen Hopkins is owed much of that credit. His vision of a near future Los Angeles is shot through an impressive array of camera techniques, from ultra-smooth stedi-cam work, to long, elaborate dolly shots. Combine that with great cinematography and razor sharp editing, the movie is a visual stunner, which brings us to the amazing production itself: Elaborate sets, large scale location shots in the heart of Los Angeles, amazing practical and optical visual effects, and a tremendously large cast full of great talent: Danny Glover, Ruben Blades, Maria Conchita Alonso, Gary Busey, Bill Paxton, Robert Davi, Morten Downey jr., Kevin Peter Hall as the Predator, and a pre-Firefly Adam Baldwin.

To top it all off, Predator 2 was given the Thanksgiving holiday for its opening weekend, one of the top four premier weekends for the entire year (Memorial Day, The 4th of July, and Christmas being the other three). Regardless of the Monday morning quarterbacking that came afterwards, Fox was all-in on Predator 2. 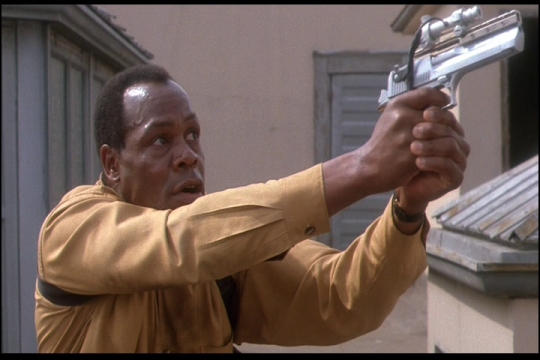 Much of the blame for Predator 2's lack of box office success was place on Arnold Schwarzenegger not returning. I never understood this argument. The movie is about the Predator, not Arnold's Special Ops unit. It only made sense for there to be a new group of characters to follow, and a new environment as well. Anything else would be a simple rehash of the first movie. **cough-Predators-cough**

Danny Glover may not have been the iconic action hero that Arnold was, but he sure gave it his best shot – and gave us one of sci-fi's most memorable characters in return. Glover's Mike Harrigan is one serious mother fucker. He is a tightly wound coil of pure testosterone and aggression. He isn't just a loose cannon, he's a loose artillery battalion. Get in his way and he will knock you the fuck out and not give a shit. He is the action movie version of the Honey Badger.

One of the great things about both Predator movies is that they would still be compelling stories, even if the Predator wasn't there killing everybody. Set ten years after the events of the first movie, Predator 2 takes place in the “future” world of 1997, but they don't go overboard on the futuristic setting. The only indication that the movie is set in the future is that all the guns have laser sights and the police drive around in Pontiac Transport vans. 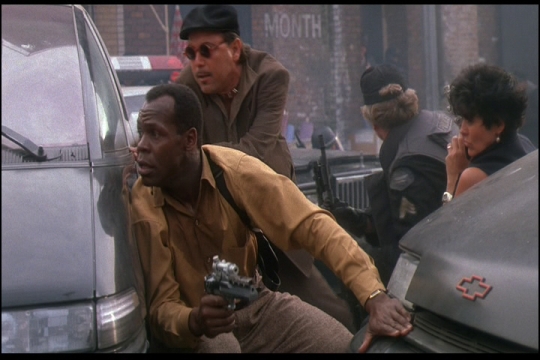 “In the future, all guns will have laser sites.”

However, the near-future setting is important, because the movie depicts Los Angeles as a war zone, with rival gangs of Colombian and Jamaican drug cartels fighting for control of the city. The police are out numbered, outgunned, and barely keeping their heads above water. The city is on the verge of Marshal Law, and that is before the Predator shows up. Much like the Spec-Ops mission of the first movie, the LA war zone is a fantastic setup for a great action movie. The alien hunter from space who rips out spines and keeps them for trophies is just icing on the cake.

4 – The Predator is Bigger, Better, and more Bad Ass

In the first movie, the Predator simply had his cloaking device, wrist blades, and a shoulder cannon (As well as the handy self destruct weapon). Showing that much like human hunters who stalk animals, the Predator shows up to the hunt with the odds in his favor to take on prey that has no idea he is there with ridiculously overpowered weaponry and call it “sport.” But I digress. 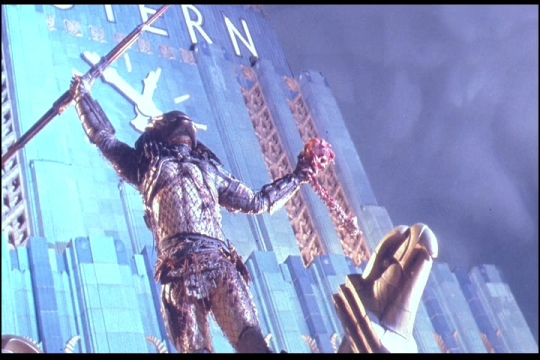 “The Predator shows off his Fatality from the new Mortal Kombat game.”

Our hunter in Predator 2 comes with those standard weapons, but packs a whole new bag of goodies: a net launcher, a retractable spear, a spear gun, and the smart disc – a heat seeking, bladed Frisbee of death. His new mask also has more “Predator Vision” modes that he can see in. There have been countless iterations of the Predator in comic books, video games, and a few movies, but his arsenal of gadgets has remained largely unchanged since Predator 2, because it just doesn't get much better.

5 – It is Alan Silvestri's finest hour

Silvestri takes the themes established in the first movie and cranks them up well beyond eleven. With an ever-so intensified tempo, the percussion hits a little harder, the strings stab a little sharper, and the horns hit you in the chest like a sledgehammer. Added to the mix are a fresh set of tribal drums and a creepy, low end vocal chorus. The results are audio gold.

I you need any convincing, just listen to the End Titles suite – an eight minute tour de force that starts off slowly and softly before weaving upwards of six or seven distinctly different motifs that builds and builds to a monumental climax. It is equal parts mysterious and sinister, epicly sweeping and intensely action packed. If you get to the end of that track and don't feel goosebumps, you better go see a doctor, because you are probably dead.

“If you like what you hear, be sure and get the album through Laser Time's Amazon.com link.”

Spoiler Alert: Lots of people die in this movie. Most of them very violently. In fact, Predator 2 is reportedly the first movie to earn an NC-17 rating purely for violence – it was edited several times to get an R rating (Even Stephen Hopkins himself seemed shocked by the violence in his own movie when he recorded his director's commentary for the DVD). Bill Paxton is among the vast body count, making him the first, and only, actor to die onscreen at the hands of a Predator, and Alien, and a Terminator. But he doesn't go down without a fight. Paxton's death in Predator 2 is much more heroic and dignified than the latter two movies. 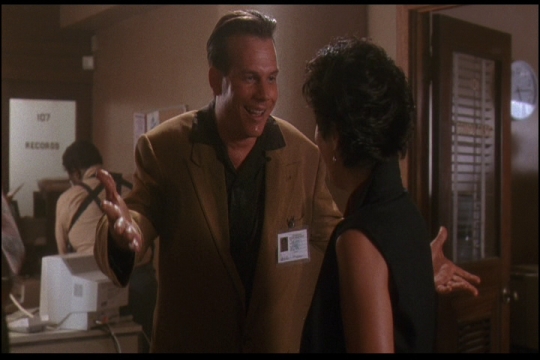 “Dying on-screen is my specialty!”

And before anyone says “But Lance Henrickson in The Terminator, Aliens, and AvP...” - Remember, Bishop survived his encounter with the Queen in Aliens; it was the escape pod's crash in Alien 3 that was his ultimate undoing. 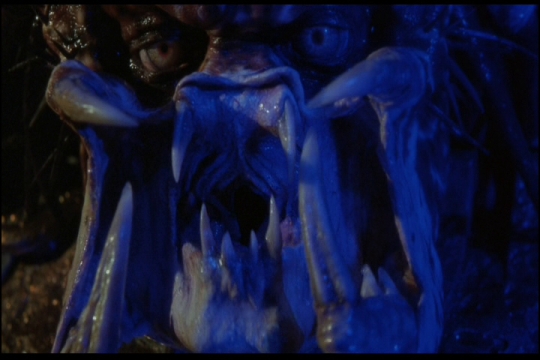 “So... remember what Harrigan said about the Predator's face earlier?”

The final showdown between Dutch and the Predator in the first movie was a classic mano-a-mano movie beat down, but much of that climax played out like a stealth mission in a game of Splinter Cell. By contrast, the finale of Predator 2 is more like a kinetic, non-stop epic game of deathmatch in Titanfall, and it lasts nearly one-third of the movie's running time.

It starts with an intense shootout in a high speed subway before spilling out into the LA streets, through a meet-packing plant, across rooftops, through brick walls, down elevator shafts, and finally ending up somewhere we've never been before – inside the Predator's ship itself, which leads to... 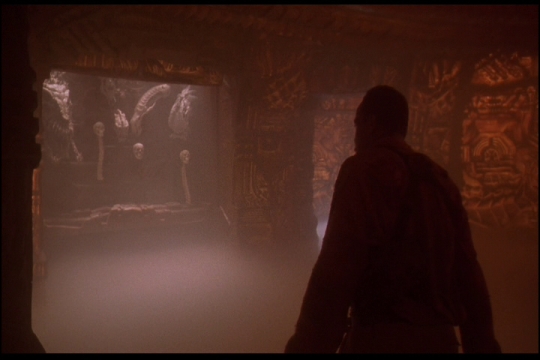 The lore and back story of the Predator was only hinted at in the first movie. Predator 2 opened up a whole universe of mythology the moment Harrigan discovers the Predator's trophy case on board the ship. Not only does it contain a few human skulls, but a wide range of all matter of creature skulls from many other alien worlds, including the jaw-dropper: an Alien Xenomorph skull.

Never before had one sci-fi movie made such a direct connection to another of that magnitude. Predator 2 may not have been seen by a lot of people when it hit theaters, but everyone remembered that scene. It was the mother of all Easter eggs that helped spawn the vast Aliens vs Predator franchise that includes comic books, video games, expanded universe novels, and even two movies. For better or worse, our pop culture gained a lot from what was intended to be a small, inside joke.

There might be no sequence more bonkers than the one that results of the quote above: About twenty minutes into the movie, the camera enters the apartment of the Colombian drug lord El Scorpio. He is so busy having insanely crazy sex with his girlfriend that it takes him several moments to notice a band of Jamaican gang members have broken into his home.

The Jamaicans are there to prove their superiority over the Colombians by capturing their leader and cutting out his heart (which they do). But then the Predator shows up, kills the Jamaicans in a massive firefight, and shows them whose boss by hanging them up and skinning them. It is an insane series of events that you will likely never see in a movie again. 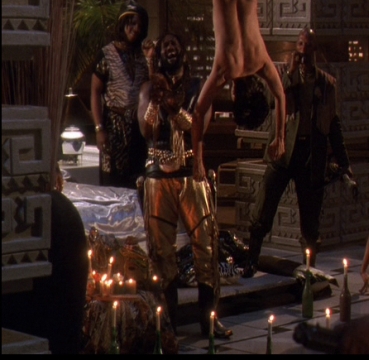 These links may be helpful

JC Foster
Kansas City native who loves movies, video games, and collecting stuff. I consider myself an atheist, feminist, and a hardcore liberal. I believe in social justice and equality. I'm kinda into comic books right now (but nothing mainstream). I support the Chiefs and the Royals, but I also love Arena Football. I've been working at various movie theaters since 1994 and have lots of stories. I have also contributed some work to Laser Time Podcast. I collect video game stuff, action figures, Coca Cola stuff. I also have one of the world's largest collections of memorabilia for the movie The Secret of Nimh and once ran a popular fansite called Maximum Nimh. Eventually, I would like to get more tattoos. I graduated from the University of Kansas and I don't like chocolate.